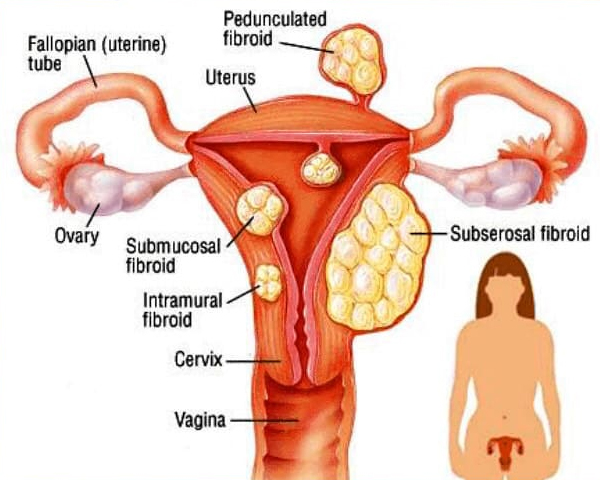 Myomectomy is a surgical procedure which is utilized for removing uterine fibroids. Doctors usually recommend this procedure for women experiencing the following symptoms.

Laparoscopic Myomectomy is performed under general anesthesia. The operating surgeon will make four small incisions for this operation. Each of these incisions will be about 0.5 inch in lower abdomen. Subsequently, the belly will be filled with carbon dioxide gas which will help the surgeon see inside the abdomen & differentiate organs. The surgeon will then insert a laparoscope in one of the incisions.

Laparoscope is a thin instrument with a lighted tube & camera on one end. Other tiny specialized surgical tools will be inserted into the other incisions. With help of these surgical tools the surgeon will cut fibroids into small pieces & remove them. The surgeon may change laparoscopic myomectomy into an open abdominal myomectomy by making a large incision in the abdomen if the fibroid is too large. After the operation the surgeon will withdraw the instruments, release the gas & stitch close the incisions.


How effective is Laparoscopic Myomectomy?

Most women undergoing laparoscopic myomectomy are able to relieve symptoms like pelvic pain & heavy menstrual bleeding following a successful operation. However, there are chances that fibroids may come back after the operation. This is especially true among younger women. Small scars from laparoscopic myomectomy are likely to show when the patient is wearing a cropped top or low-cut bikini. However, these scars are much smaller when compared with traditional open abdominal myomectomy scars & generally also fade over time.

Likelihood of future pregnancies largely depends upon the type & number of fibroids the patient is having. Women who have undergone removal of six fibroids or more are less likely to attain pregnancy than patients who have had lesser number of fibroids removed. Since this procedure weakens the uterus, there are chances that progress in pregnancy or during labor the uterus may tear. However, doctors usually recommend cesarean delivery for patients so as to prevent such complication. In such a scenario doctors recommend scheduling cesarean shortly before the actual due date. Quite often cesarean operation is performed through the myomectomy incision site in order to reduce the number of scars.

Laparoscopic Myomectomy can be effectively utilized for removing & relieving symptoms caused by uterine fibroids. However, the type of myomectomy procedure to be applied will depend upon the size, number & location of uterine fibroids. You will therefore have to consult the operating surgeon to know if laparoscopic myomectomy is the right procedure in your case. Make sure that you understand all possible risks & benefits of the procedure before you decide to undergo operation.
MENU